These different cyclic processes, which develop according to certain universal laws and undergo fluctuating electromagnetic fields, have a powerful influence on Earth’s and human evolution.

In recent years the Earth has been passing through two large cycles, particularly the cycle of precession, which happens approximately every 25,920 years and a galactic shift, about every 108 million years. Many ancient calendars, including the Mayan calendar, are based on the precession cycle. 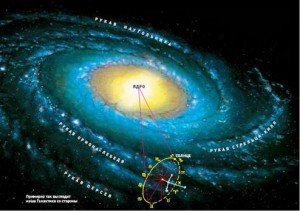 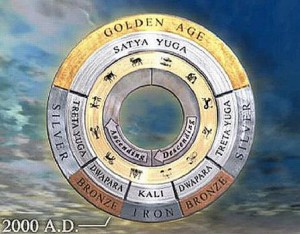 Our Solar System in the Galaxy and the Cycle of Precession, Wheel of Time charts in a 25,920 year cycle of the Earth and human evolution

The ancient Vedic, Greek, Inca, Chinese, Hindu, Egyptian, Mayan and Hopi civilizations have all tracked the cycle of precession and by having developed precise astronomical calculations, more accurate in comparison with the modern science and the Gregorian calendar, they were able to determine that December 23, 2012 would end with the old cycle.

When the sun orbits through the galaxy, it is bringing the Earth closer or further away from the grand galactic centre. This is the centre of subtle energy and the creative power, which regulates the mental and spiritual level of the internal world. It is the proximity of the Earth and Sun to this grand centre that determines the level of human civilization, health, intelligence and spiritual wisdom. With more distance of the solar system from the great centre, the power of the human mind wanes, humans lose the ability to perceive the essence of the divine spirit as well as reduce mental strength and life expectancy. Humans cease to perceive the subtle world and focus all attention on the material world. However, now according to the solar system positioned in the Galaxy and the Cycle of Precession, humanity is moving into a period of awakening and further enlightenment.

As it has been recorded by science, the sun has created unusual flashes of electromagnetic waves before that date and now. The Ancient Indian Rishis called 7.83 Hz the frequency of OM. It also happens to be Earth’s natural heartbeat rhythm, known as the “Schumann Resonance.” For many years, this resonance frequency has hovered at a steady 7.83 Hz with only slight variations. In June 2014 that changed. Monitors at the Russian space observatory showed a sudden spike in activity to around 8.5 Hz. Since then, they have recorded days where the Schumann accelerated as fast as 16.5 Hz. That means that the background frequency of the Earth continues to rise and likely cause fluctuating weather patterns and climate to become more severe; also impacting the internal vibrations of the human mind and in turn, affect the psychological and physiological state of humans.

For example, people, living in fear and other negative emotions may experience processional alignment as terrible and frightening events that will significantly weaken their immune system. If people strongly manifest the virtuous qualities of character such as kindness, love, generosity and permanent focus on divinity then the transition to high vibrations should be positive.

However, the entire societal structure of the current civilization is based on a premise of competition that keeps humanity in a position of always struggling, in perspective of lack, limitation, fear and separation. The surrounding environment has a powerful influence on humans, thus living in a city and working in a competitive atmosphere is almost impossible to constantly be in a state of love with an open heart.

From what has been discussed, it can be concluded that with the end of the old cycle and the beginning of a new cycle according to Earth’s movement in the solar system, all living forms on the Earth is experiencing significant global pressures and entering a new period of development and this influences every human being to impel awakening and a shift in consciousness into a new level of existence.

The precession alignment of 2012 along with global crises acts as an impetus to accelerate the spiritual evolution of human beings and designs that would lay down the foundation of a great transformation towards a healthy and prosperous future.

The events that will take place in the world in following years will change many belief systems. At this time, it is very important to understand what is happening on Earth as it is a crucial time for everyone to let go out of destructive ideas and concepts that are not conducive to life.