·
When my subjects are in the deepest level of trance we can access the subconscious directly in a variety of ways. I have discovered that all knowledge is available once you tap into the wisdom of the subconscious mind. Often the person is given the information directly through past lives, and other times they are taken to places where they can access the information and interpret it for themselves. This is often done by visiting the Library on the spirit side.
Every time I have a subject in the deepest possible level of trance I have many, many questions. When I was made aware that I had access to an unlimited source of information my reporter’s insatiable curiosity took over and I wanted to know everything I could about every conceivable topic.

·
Dolores: There have been many different theories as to how the ancient pyramids in Egypt were built. Could we have some information on that subject, please?
P: These structures were built with the aid of levitation, which is being rediscovered in some areas on Earth today. The act of moving these stones was accomplished with pure mental energy. This is as possible today, at this hour, as it was at that lime. It requires total focus and concentration. There were a group of five to seven of the priests who were schooled in this science and many other sciences. This was merely one aspect of their training. The knowledge was transferred from Atlantis. The pyramids were a gift of the knowledge from Atlantis.
D: Was levitation the only method by which these stones were raised?
P: There was singing of tones that accompanied this. It was a religious experience as well.
D: I’ve also heard that maybe some pyramids were constructed in a different way.
P: There is much speculation in the world. Always when the knowledge does not exist on how something was constructed, it is theorized that it was constructed in a manner, theoretically which is common to the civilization at that time. It would not be natural to suppose a construction method which would be unknown at that time. There are many ways of building pyramids. Some are more relevant than others.
D: Another person told me, she saw them being poured, as we would pour concrete today.
P: We see they were quarried and cut and then levitated. However, we will not discredit that information for we are not in complete control of all information. And this may be entirely accurate. From what we see however, the stones that we are familiar with were cut and quarried in distant locations and then transported by telepathy. The priest would accompany the stones on the transport and then levitate them to that point from which they were erected. The work was more mental than physical.
D: Then they were transported by levitation also? I was referring to the transportation of the stones, but Phil thought I mean the priests were levitated also.
P: The priests were transported in more conventional manners, as in chariots, but would accompany the stones and keep the stones in their sight, so as to firmly keep the stones in their concentration.
The stones were transported from the quarries to the site by levitation and were then moved into place with levitation. The entire raising was done with levitation. The energies used and extended in those stones during their levitation was stored. Each stone stored a small part, and so the pyramid as a whole contained much energy. The stones act as crystals in that they can store human energy as well as many other energies.
D: You mentioned singing, music. What part did that play?
P: This is a physical manifestation of that energy which is being focused. 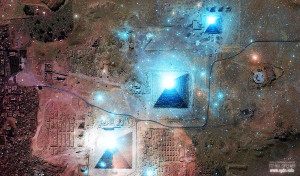 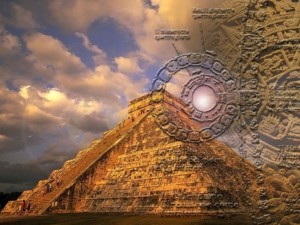