A unique expedition to the reserve zones of the Caucasus

The Caucasus is an amazing region with mild climate and have majestic peaks covered with ice caps, picturesque gorges, numerous waterfalls, clean mountain air and living water. In 1999, the territory of the Caucasus State Natural Biosphere Reserve (280335 hectares / 692722 acres) was included in the World Heritage List. The protected zone of the Caucasus is a real treasure, personifying the natural diversity. Since ancient times, the mountain ranges of the Caucasus have amazed travellers with its grandeur, pristine beauty of nature and the diversity of landscapes. For centuries seekers come here hoping to find among the mysterious mountains the answers to questions, to discover their way and their purpose in this incarnation. Legends says that gods reside in this mystical place but are invisible to the human eyes. Their sacred knowledge is preserved in the stones, mountains and rocks of the Earth’s crust of the Caucasus, while the guardians of the information are creatures of different races living in a reality, which is parallel to ours.

We invite you to an esoteric expedition throughout the Caucasus to experience a rebirth of body and soul, on the lands where great teachers of the past have left their mark. Perhaps a journey into an exotic country will lead you to yourself. 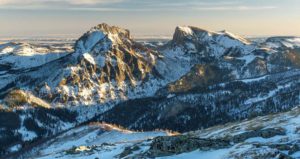 The unique places that we will visit stores energy of the people from Primary Origins. This atmosphere will help you to see your inner world and recharge with the energy of the beautiful mountains. As you are immersed in nature, you may feel the movement of energy flows. While ascending the mountains and being fed with a powerful stream, you also ascend within yourself.

The main goal of this expedition is to spiritually evolve, return to the Divine state of consciousness and rejuvenate, which can be achieved through the practice of self-improvement in a natural environment free from technology-derived radiation.

Krasnaya Polyana is a distinctive resort village with a long history and a unique place with its beauty and nature. The combination of mountains, glaciers, rivers and lakes give Krasnaya Polyana magical beauty. As one ascends the mountains, one can observe how the natural zones change from subtropical to alpine. Thanks to the alpine nature, Krasnaya Polyana is often called the Russian Switzerland. However, unlike the European ski resorts, Krasnaya Polyana is located near the sea, which provides a mixture of sea air rich in iodine and fresh mountain air that passes through the village.

The mountains of Krasnaya Polyana are located in the south of Russia, 38 km (23.6 miles) from the Black Sea coast at an altitude of 500 meters (1640 feet) above the sea level, 64 km (40 miles) southeast of the city of Sochi in Krasnodar region. Sochi itself is the biggest coastal resort town in Russia. Krasnaya Polyana is a modern, developed mountain complex consisting of 4 mountain ski resorts (Gorky, Alpika, Rosa and Gazprom), which have hosted the 2014 Winter Olympics in Sochi. 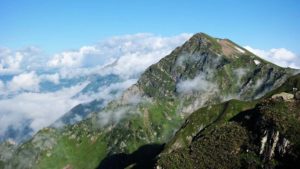 As an olympic mountain village, Krasnaya Polyana is a paradise for all types of outdoor activities. Despite the fact that most people associate Krasnaya Polyana exclusively with the ski resorts, there are also plenty of opportunities for summer recreation.

At your request, we will create for you an individual program, which includes any of the following outdoor activities: 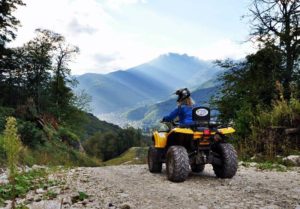 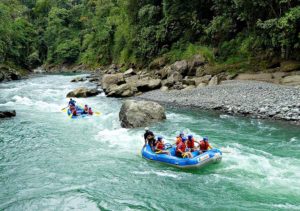 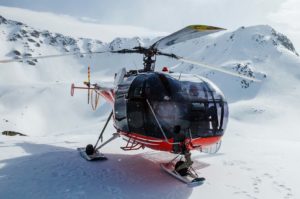 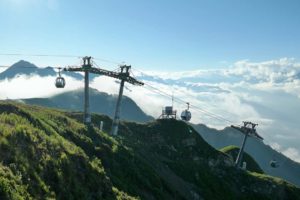 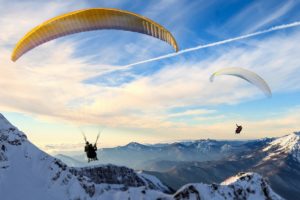 Krasnaya Polyana is famous for its fragrant alpine honey, which is exceptional in its taste and has many healing properties. This honey is from the nectar of medicinal herbs collected by bees on the slopes of the surrounding ridges.Krasnaya Polyana is also a balneotherapeutic health resort (balneotherapy is based on treatment using natural mineral springs). There are many mineral springs in the area. One of them is located at the foot of Mount Achishkho at an altitude of 1400 meters (4593 feet) above sea level. The water in the spring is pleasant to the taste and it contains carbon-ferrous.

The Narzan source called “Pslukh”, which is located on the left bank of the Pslukh River, 15 kilometres (9.3 miles) east of Krasnaya Polyana, is widely known. The water in the source is transparent yet carbonated, sourish, ferruginous in taste and slightly gives off hydrogen sulfide.

Thirty kilometres (18.6 miles) from the village, on Engelmanovaya glade, 1450 meters (4757 feet) above sea level, along both banks of river Mzymta, there are more than 120 outlets of mineral water. Here, the water beats out of the ground with bubbling fountains. In one spot there is even a lake, where streams of mineral water arise from its bottom, creating bubbling on its surface.

The largest mineral spring "Tsarsky" means royal and is located on the right bank of Mzymta, near the path leading to Lake Kardyvach. Its water is pleasant to the taste and highly carbonated.

On the way from the airport, 10 kilometres (6.2 miles) before reaching Krasnaya Polyana, there is a mineral spring on the Chvizhepse river in a place called “Bear's Corner”.

The healthy nature of Krasnaya Polyana, that includes a variety of healing waters allows for the restoration of health and rejuvenation.

Places of interest of Krasnaya Polyana 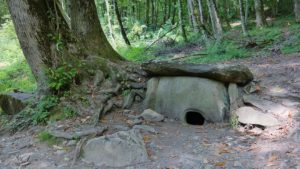 One of the most mysterious sights of Krasnaya Polyana is a group of dolmens which are located in a sacred place of power that gives an influx of energy and new sensations. The complex of dolmens consists of seven stone structures, four of which are tiled and three are well-shaped built from separate stone blocks.

Around the dolmens there are a large number of stones scattered. Two sacral stones and twelve cup stones with holes of artificial origin were found on the territory of this shaft.

Most of the dolmens of this place are still hidden under a layer of earth but the wise men of these dolmens are waiting to be discovered and ready for communication. The wise men of the dolmens are the guardians of the fundamental wisdom from Prime Origins, who ten thousand years ago, entered the dolmens in meditation and retained their consciousness and etheric bodies in order to transfer knowledge of the Prime Origins to the people of our time. Of course, at the moment, they are not in our physical reality because they exist precisely on the subtle plane of being, however, those who are interested can learn to communicate with them.

Many of wise men of the dolmens live in the sacred places of power near the village of Medoveevka and Krasnaya Polyana and help people to clear their minds from vanity, to comprehend their spiritual wisdom, to remember their purpose, to restore the capabilities of the Prime Origins, to cleanse the body, to learn how to control their body on the cellular level, to achieve full health, longevity and much more. 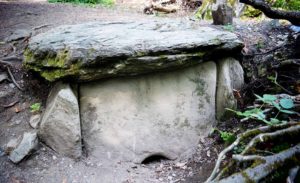 By visiting these places of power, people will be able to free themselves from the impact of the matrix system by expanding their horizons and finding inspiration for a new life. During visits to the dolmens and afterwards, fresh ideas, renewal of the senses may emerge to discover new hobbies and get rid of habits and attachments that take energy. With an emotional reboot, one can return to everyday life with a clearer perception and find best solutions for a better life.

Visiting places of power allows to remove the emotional load from the energetic body and as a result, feel the state of internal flight as an exhilarating experience. Once this happens, it has a profound transformational effect and assists in harmonious evolution throughout life.

Cultural and ethnographic center "My Russia"

The cultural and ethnographic center “My Russia” is a unique architectural ensemble, “Russia in miniature” built with centuries-old traditions of house-building in various regions of Russia. The fabulous center is located on the banks of the turbulent mountain river Mzymta and is surrounded by the pure nature of the Caucasus nature reserve.

The cultural and ethnographic center "My Russia" was created before the Olympics so that foreign tourists could feel the cultural characteristics of Russian people and unique ethno-pavilions were specially built, each of which recreated elements of culture and life of different peoples of Russia. On a territory of 3.3 hectares, there are 11 thematic pavilions demonstrating the architecture of the regions of Russia: the Caucasus, Suzdal, Central Russia, Moscow, Krasnodar Kray, St. Petersburg, Kazan, Ural, Siberia and Buryatia. Each building is built with cultural, historical and architectural features of the region. There are copies of iconic structures such as the Moscow and Kazan Kremlin, a courtyard with a wicker fence and thatched roof of a house from the Kuban outback, a Ural brick factory, Buryat Datsan and many other buildings and structures characteristic of different regions of the country. 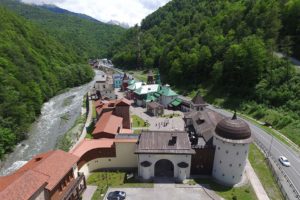 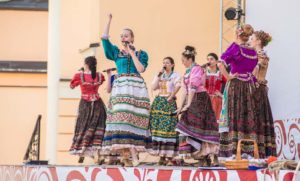 Having visited the ethnographic center and acquainted with the traditional life of different nations, you will see that all cultures have much in common with each other. The main idea of ​​creating this small cultural oasis is a reminder of the equality of nations between themselves, where each of them has the right to preserve culture and traditions. This ethnic diversity is the highlight of Russia.

Sochi National Park is a real pearl of southern Krasnodar Territory and is Russia's natural pride, embodying the natural richness of the environment of the Caucasian mountains and subtropics of the Black Sea coast. The park area is 190,000 hectares (469,500 ​​acres).

Sochi National Park is considered to be a unique place in Russia, because nowhere else in the country can one meet the combination of Alpine mountains and subtropics. That is why the mountainous Black Sea region is characterized by the most complex range of high-altitude zones on the territory of Russia. One can enjoy the mountain deciduous forests at the foot of mountains to beech and coniferous forests throughout the valleys to subalpine landscapes in the high mountains with bare rocks and snow. The territory of the Sochi National Park is the museum of the fauna of the Krasnodar Territory with a very rich and diverse flora. 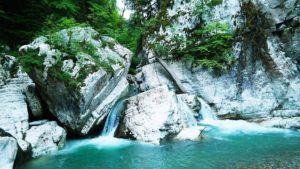 Not only natural, but also cultural and historical treasures of the region are concentrated on the territory of Sochi Park: a lot of dolmens, megaliths, caves and fortresses. It is also a varied activity from hiking or horseback riding to climbing. More than a hundred river waterfalls are available for tourists in the park, falling from a height of 2 to 72 meters as well as canyons, gorges, caves, mineral springs, lakes, ancient forests, viewing platforms and picnic meadows. 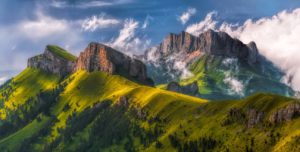